The health sector in Syria is divided between several sides.

the above sides provide the health services to all citizens of the country without exception, with high response, speed and quality required, making the available efforts to promote and provide the health services in the normal circumstances and at any emergency situations on any place of Syria under the supervision of ministry of health witch provided more than 53 million medical services during 2017.

Health Facts during the Syrian crisis: 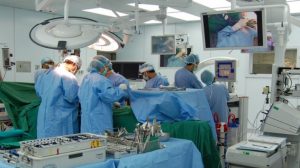 As in all sectors, the health sector in Syria has been heavily affected, especially in ministry of health  which suffered damage to approximately 631 health units between partial and total damage or were not known data because of its security situation during the crisis , in addition of 52 hospitals were exposed to mentioned damage ( 10 fully and 25 partially damage with unknown data of 17 hospitals in 2017 ), as well as the hospitals of Ministry of Higher Education such as Al Kindi Hospital in Aleppo Governorate. in addition of the damage of some pharmaceutical factories in different regions, resulted in out of service or working in alternative locations.

The Government of the Syrian Arab Republic has continued to develop its methodological plans to rehabilitate the damaged medical centers and hospitals throughout the crisis in conjunction with the efforts of the Syrian Arab Army to liberate the land in the light of the return of the population to the liberated areas, in addition to providing various medical equipment to ensure the continuation of its work in accordance with priorities. , Based on well-considered criteria. Adoption of emergency reconstruction plans; providing financial funding and support for investment plans; as well as plans for international cooperation with friendly countries and relevant international organizations, especially in light of the unilateral economic siege imposed on Syria.

Investment in the health sector for post-crisis in Syria

At the end of the global war on the country, and the return of security, the Government of the Syrian Arab Republic is fully aware of where it is going through the follow-up and preparation of the comprehensive national program for post-crisis Syria, which carries the vision, objectives, aspirations, programs and projects promising for Syria to move qualitatively Relief phase to recovery and recovery , to sustainability in order to achieve the complementary situation in the economic health sector  through the process of reconstruction and restoration of infrastructure and the provision of medical equipment necessary for the continuity and sustainability of the health . Which encourages in the next stages for the optimal investments in health economic sector field at all levels, in light of the following:

The completion of the rehabilitation of medical facilities, equipped with the best equipment required, the various medical supplies and qualified medical staff to provide with the best medical services, is a major goal of the Syrian government in order to ensure that the health sector in Syria will maintain its reputation and emulate the advanced countries in medical field at all levels and specializations.